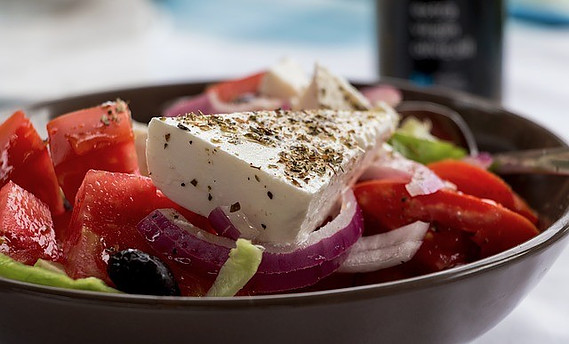 10 Foods You Must Eat In Crete Greece

10 foods you must eat in Crete Greece, OK, if you are on a diet, this article is gonna be very tempting and you might cheat on your diet because I am going to share with you mouth-watering dishes, that you must eat when you are in Crete and Greece at large.

Musakaa most people won’t consider being in Greece without eating Musakaa, and its become almost mandatory, to eat Musakaa when you visit Greece so you can tell your friends that you have tried it, Musakaa is made with Aubergines, and mince beef and lots of Cheese.

When it comes out it’s nice and golden and you can have it either with salad and some bread or you can just enjoy it on its own it’s up to you.

Gemista This is a dish that is made by stuffing either bell peppers or tomatoes with a mixture of rice, herbs, and mincemeat, it is a very filling meal and it’s usually served with yogurt and you can accompany it with bread if you like.

Pastichio This is a dish that is very close to Musakaa, actually, its made the same way but instead of Aubergines, pasta is used. This is a good substitute for people who don’t like Aubergines, its really no much different from Musakaa, so you can still go and brag to your friends back home lol

Are there Any Vegetarian Greek Dishes? 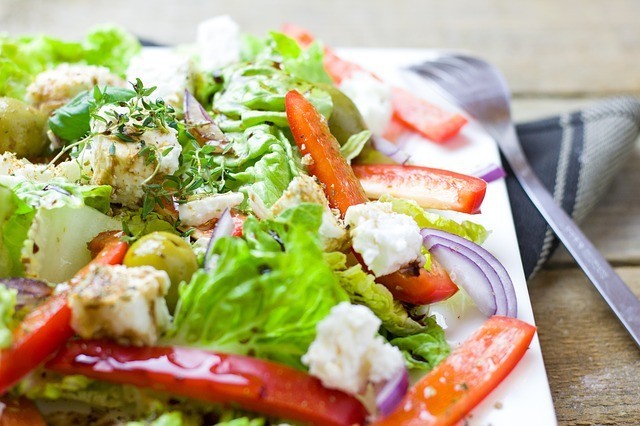 Fasolakia Ladera because most Greek cooking will either contain Meat or cheese or both, vegans and vegetarians do have a hard time but there are a few dishes that don’t contain either cheese or meat and they are so mouth-watering, one of those dishes is Fasolakia Ladera,

This dish is made of fresh green beans that are a bit thicker than your typical french beans, the recipes for Fasolakia Ladera vary depending on the family as well as what is in season, some people will add potatoes and carrots, and some people make it with just green beans, garlic, lots of red onions and tomatoes.

But whoever its made, this is a delicious dish

Dolmades This is another dish that is meat-free and cheese-free, although there is a version of Dolmades that contain meat, the rice stuffed version is very popular especially in the summer months when the grapevines have fresh leaves. Although Dolmades can be made with cabbage leaves, the vine ones are more favored.

The non-meat Dolmades are stuffed with rice, lots of red onions, olive oil, dill, parsley, lemon juice, and salt and pepper. they are a usually served at room temperature with yogurt but you can always opt-out of yogurt if you don’t want yogurt, the meat dolmades are usually served with a lemon and egg sauce called avgolemono.

What Else Do We Have On Our Greek Menu? 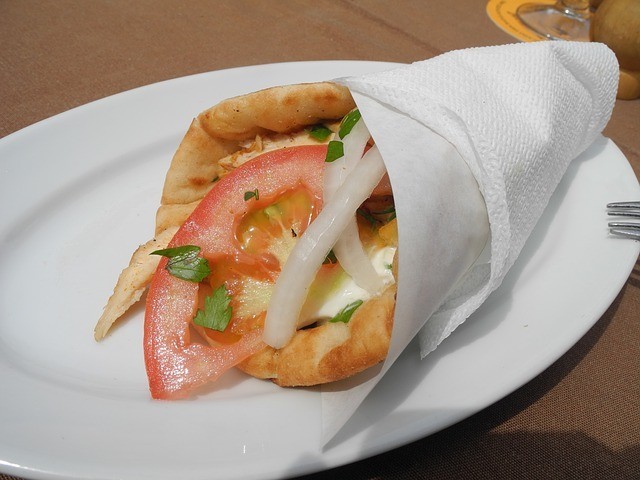 Gyros this is another thing you must try when you visit Crete or any part of Greece, this is meat prepared on a vertical rotisserie and you have a choice of either pork or chicken and in some places in Crete you even have lamb, the meat is usually shaved off the rotisserie and wrapped in pita bread with either tzatziki or yogurt, fresh onions, and tomatoes ( I prefer mine with yogurt)

Speaking of Tzaziki, this is a dip made of thick Greek yogurt and cucumbers and Garlick, the recipes of this dip varies from place to place, some put lots of garlic and some just make it mild, some people do add other spices which could make it quite strong.

Keftedes, I love keftedes, they are made of beef mince, egg, oregano, mint, and grated red onions, they are then shaped into small balls and lightly dusted with flour and then fried on the pan using olive oil, they can be served with patates tiganites ( Greek Version of French Fries) salad, and you can also have them with ether Tzaziki or yogurt.

There are also meat-free versions of keftedes one is called Kolokithokeftedes, which is courgette balls, this would be a good substitute for someone who doesn’t want to eat meat, the courgette balls are delicious and they are very popular in Crete. there is another version and this one is made with tomatoes it’s called domatekeftedes.

More Foods You Must Eat In Crete Greece 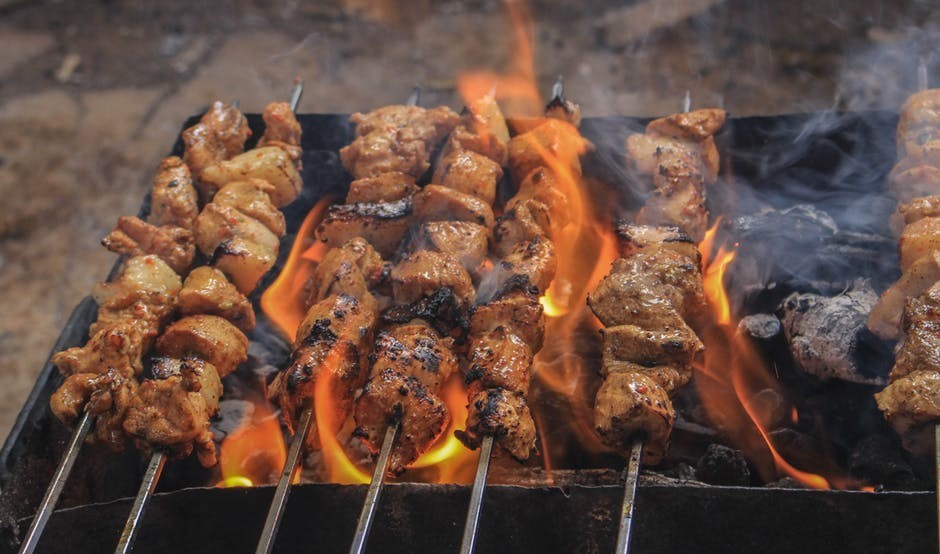 Souvlaki, this is another thing that you must eat when you visit Crete or any part of Greece, you simply can not leave Greece without having a souvlaki, its simple yet delicious, Souvlaki is usually chunks of meat on a skewer grilled to perfection, OK, I love souvlaki if you can’t tell lol. You can choose between chicken, pork and Lamb.

Spanakopita, this is another thing you simply must eat when in Greece, its a spinach pie its very simple but its absolutely mouth-watering, even people who don’t like spinach will like it, the mixture of fresh spinach mixed with feta cheese and butter then covered with pastry brushed with melted butter and baked until crispy and golden brow, who won’t love that eh? 🙂 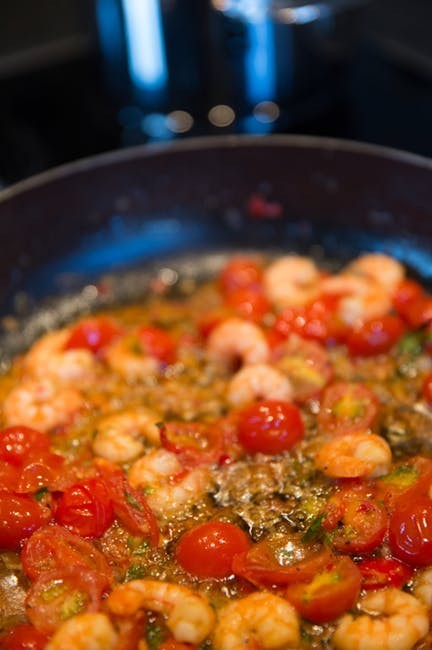 Garithes Saganaki, this is a prawn dish made in a heavy-based pan, the prawns are cooked in an onion and tomato sauce after they have been marinated in Ouzo and herbs., just before taking the dish from the fire, the chef will add some feta cheese and give it just enough time to melt, this dish is absolutely delicious served with crusty bread and salad its amazing.

OK, that concludes our list for today, now I have to go and get something to eat because all this food talk has made me very hungry lol but before I go, I have a couple of honorary mentions, one is Valva, this is a dip made of yellow lentils and it’s my favorite dip,  I have a favorite restaurant here in Crete where they make it with sun-dried tomatoes and fresh red onions.

And then they garnish it with fresh chopped parsley, yummy.

Tiropites, these are small pies made with cheese, so they are just cheese-filled pastries but they are yummy too.

OK, I am done now,  I hope you have enjoyed my list, please share your thoughts on the comment section, I did not include any desserts on this list because my next post will be about Greek desserts so keep an eye for that.

I will leave it there for today, thank you so much for your time.