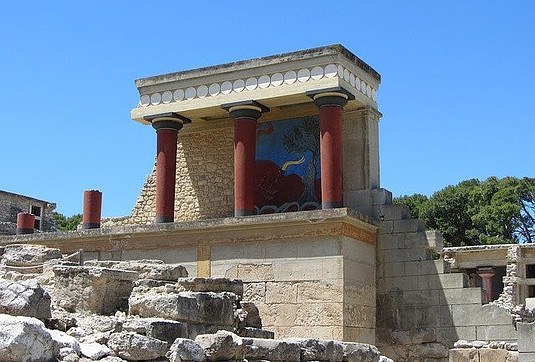 I just had a very interesting and exciting time this past weekend and I thought I would share with you tips that will help you if you are planning on visiting the Minoan Palace of Knossos. But before we get into it, lets first learn a little about Knossos.

Knossos is an ancient city first discovered in 1878 AD, and the excavation started in 1900 AD. The excavation team was led by English Archeologist Sir Arthur John Evans.

The Minoan Palace Of Knossos 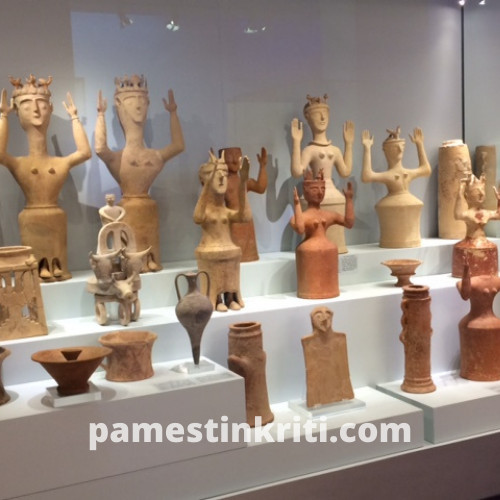 Located just 5km from the center of the capital city of Crete, on the south side of Heraklion, Knossos Is considered the oldest city in Europe, and the Minoan Civilization is considered the first civilization in Europe. The city of Knossos is believed to be between 6,000 to 7,000 years old making it older than the pyramids of Egypt. Minoans named after King Minos were very intelligent and talented people.

Their knowledge, style, and sophistication in craftsmanship is evident on the remains of the Palace, as well as the artifacts that were recovered during the excavation which are displayed at the archaeological museum of Heraklion.

The Minoan Palace Of Knossos, is very impressive, even though there isn’t much left of the original structure, the little that is left is enough to give a feel of just how talented and how ahead of their time the Minoans were. The palace has an area of about 3 acres, and that does not include the outer structures. All together including the courtyard, the palace covers an area of 5 acres.

Its believed that King Minos, made it possible for sea trade by clearing the sea of pirates, this was made possible thanks to Minoans ability to build the most sophisticated and powerful sea vessels. By clearing the sea of Pirates it was easier and possible to trade with many parts of the region with Minoan pottery being discovered in many places including Cyprus, Egypt, Syria, Sicily, not to mention the other Greek islands like Rhodes, and mainland Greece

How The Minoan Palace Of Knossos Was Destroyed

Although it’s unclear, exactly when the city of Knossos was abandoned or the reasons for abandonment, it’s believed that the city was devastated by a volcano that erupted in the nearby island of Santorini as a result of a great earthquake. Now the City of Knossos, had faced disasters before like earthquakes, and other disasters, but they were always able to rebuild the city.

But the devastation caused by the volcano in Santorini was so great that it’s believed the ashes sent to Crete created a toxic mist in the air that covered the sunshine, and the air was so toxic that the animals and the crops perished and many of Knossos inhabitants also perished and the ones that survived had to seek refuge somewhere else away from the catastrophe that had befallen their city.

So it’s believed that’s how the city of Knossos was abandoned and forgotten, However, there is another theory that suggests Knossos was abandoned as a result of violence caused by invasion by the Greeks, maybe Mycenaean who were very powerful in the mainland Greece and their only rival was Knossos, so it’s speculated that the Mycenaean had to wipe out the competition.

Now that we have learned a bit about Knossos and the Minoan People, I want to share with you tips that will make your trip to Knossos more enjoyable and comfortable. I might even save you some money lol. The first thing you need to know is that even though the roads are flattened for easy access to the sites, you do need to wear comfortable shoes.

If you wear uncomfortable shoes, that could spoil your experience at Knossos, and you really don’t want that. If you are a history lover, you want to spend as much time as possible at Knossos reading the descriptions of sites and objects, so you don’t want your feet to be hurting while you are doing that.

Remember to take a hat with you as well because you are walking in the sun the whole time, you might also consider applying some sunscreen. And remember, When you are planning your visit, I would suggest you plan to visit Knossos when it’s not too hot, like mid-September, and early October. One thing is for sure, you don’t want to be walking around Knossos in July or August.

How Long Does It Take To See Knossos?

Well, that really depends on how interested you are in each site you visit but I will say between one and a half to two hours

You also need to decide if you want to do the tour with the tour guides, in my opinion, it’s better to do it on your own, that way you can walk at your own pace and stop when you want, or even take breaks when you want.

The guided tour will cost you 12 euros per person because, there was a lady who had convinced us to join her group and she told us that her fee is 10 Euros(about $11.90) she also said that we have to pay another 2 Euros to the office, so all together for the guided tour we were to pay 12 Euros(about $14.23) per person.

Anyway, after waiting for more than half an hour for her to get the number of people she needed to get before she could start the tour, we got fed up and told her we had changed our minds and we were going to walk on our own. That turned out to be the best decision actually because we were able to walk at our own pace, spend as much time as we wanted at a particular site, and just take our time.

Where To Buy The Tickets For Knossos

I highly suggest you start by visiting the Archaeological Museum of Heraklion, and when you buy the ticket for the museum, you have an option to include Knossos, it cost us 20 Euros(about $23.8) per person and it gave us access to the museum and also access to Knossos and the ticket was valid for 3 days so you don’t have to do both in one day.

How To Get To Knossos From The City Center In Heraklion

Its very easy to get to Knossos even without taking a taxi, you can take a bus, from the bus station which is located near the Heraklion port, the ticket is 4 Euros and the buses go every 20 minutes. The cheapest way for one person to travel to Knossos is by bus for sure. But if there are two or more of you, then I suggest taking a taxi.

If you decide to take a taxi, it’s going to cost you about 10 Euros, we took a taxi and we paid 7 Euros but we were staying at a bed and breakfast that’s close to Knossos.

Do I Have To Wear A Face Mask In Knossos?

Yes, you must wear a face mask otherwise you will not be allowed access, you also have to practice social distance, by keeping a distance of 6 meters from the next person.

And the same goes for the archaeological Museum too. I must also caution you against wearing the plastic masks, they are not permitted, you need to wear a fabric mask.

As we have mentioned, it will take you some time to go through Knossos, and also as we said, you will be walking in the sun the whole time. So is very important to be hydrated, so take some water with you, or the drink of your choice(not alcohol lol) Also take some snacks with you because the food at the cafe in Knossos is quite expensive. So if you are on a budget, I suggest you take your own snacks and drinks.

I checked the prices at the cafe and one Gyro will cost you 8.50 Euros (about $10.07) so if you are traveling with young ones, and trust me they will be hungry and thirsty after the walk around Knossos. It will cost you some money at the cafe.

The Minoan Palace of Knossos is a must-see when you come to Crete, especially if you love history. I was very impressed by just how the artifacts from the palace especially the pottery has survived all those years, and have retained their color and designs.

I was also impressed by the jewelry collection, and how the Minoan Women beautified themselves. They are depicted with long wavy dark hair and wearing eyeliner, and their lips are colored too.

Anyway, I am going to leave it there, for now, if you would like to watch my YouTube Video, please do so here.

Also, I would like to hear from you, have you visited Knossos? What was your experience there?

Leave your comments below.